Below is today's Easter Sunday online worship service from Living Water Lutheran Church in Centerville, Ohio. Lower on the page is the manuscript for today's message. God bless you!

Matthew 28:1-10
For several years after I came to faith in Jesus Christ, the people of our home church had been telling me they thought God was calling me to be a pastor. Both Ann and I were resistant to the notion.

We were both deeply involved with our church.

We both wanted to honor the God revealed in Jesus.

But neither one of us saw me as a pastor, especially after I’d gotten a job that I thought would be a stepping stone to the political career I’d always wanted to pursue, working for the State House of Representatives in Columbus.

Eventually, though, the call of God to pastoral ministry became irresistible to me.

I applied to seminary. On the day I was admitted, while retaining my full-time position, I took a part-time job in the office supplies department of a local Sears store.

During my first night there, a woman purchased a file cabinet. As I rolled the cabinet with a two-wheel dolley to her car, she asked me about myself. I told her about my wife, my full-time job, my call to start seminary in a few months.

After I’d loaded her car, she held out two-dollars to me. “Oh, ma’am,” I said. “We’re not allowed to take tips. This is just part of the job.” “I don’t care,” she told me. “You’re going to need every penny you can get and I want to support you in following God’s call.”

I thanked her and rushed back through the sales floor where I worked into the stockroom. I was shaking, tears in my eyes. I felt as though God, through that woman, had reached out to me and said, “You didn’t imagine this call. It didn’t just come from the people with whom you go to church. It came from Me.”

It was a moment of fear at the enormity, power, and reach of this living God we know in Jesus, a kind of terror in knowing that the Creator of the universe was intervening in my life. Who was I? How could I, a sinner, possibly survive being in the sight of God Almighty?

It was also a moment of joy at the thought that this same God cares to reach us, love us, and affirm us even in retail parking lots and stockrooms.

All I could think, as I excitedly paced amid the shelves of boxes, shaking, was to pray, “Thank You, Lord. Thank You. Thank You.”

In our gospel lesson for this Easter Sunday morning, Matthew’s stark yet theologically fraught account of Jesus’ resurrection, we’re told that after Mary Magdalene and another Mary left Jesus’ empty tomb, where an angel told them that Jesus was raised from the dead: “the women hurried away from the tomb, afraid yet filled with joy, and ran to tell his disciples…” (Matthew 28:8)

Let’s be clear about why the women were afraid.

They weren’t afraid of the things of this world.

They weren’t afraid of men or nature.

They weren’t afraid of hostile soldiers or empires.

Nor were they afraid of the ills of this world, like suffering, disease, plague, or death.

They had seen first-hand just a few moments before that nothing--not men, soldiers, nature, disease, or death--can stand up before God.

They were afraid of this good news, the Easter news, the greatness of God, and the privilege of being the first people to preach the Easter message to the world.

Matthew tells us that the women had gone to “look at the tomb” (Matthew 28:1). In the Greek in which Matthew originally wrote his gospel, the word he uses which is here translated as “to look,” is θεωρῆσαι (theoresai). It’s where we get our word, theory.

When we’re confronted with tragedy, things we can’t comprehend, we want to have a theory of the case.

That’s why some people ignore facts and are open to concocting or believing crazy conspiracy theories, as is happening today with the coronavirus pandemic. They want to make sense of an often senseless world.

Grieved, their hopes that Jesus had been the Messiah, God the Son, seemingly dashed, the women go to the tomb to look, to theorize: Why did Jesus die? What will they do now? Jesus’ death makes no sense to them.

Verse 2: “There was a violent earthquake, for an angel of the Lord came down from heaven and, going to the tomb, rolled back the stone and sat on it. His appearance was like lightning, and his clothes were white as snow. The guards were so afraid of him that they shook and became like dead men. The angel said to the women, ‘Do not be afraid, for I know that you are looking for Jesus, who was crucified. He is not here; he has risen, just as he said. Come and see the place where he lay. Then go quickly and tell his disciples: “He has risen from the dead and is going ahead of you into Galilee. There you will see him.” Now I have told you.’” (Matthew 28:2-7)

An earthquake, in this case, a convulsion of the cosmos as God intervenes to save the human race--to save you and me--from sin, from death, from futility, from separation from God--occurs on this first Easter Sunday just as one had occurred on Good Friday when Jesus drew the final breath of His earthly human life.

On Good Friday, Matthew tells us, the earth shook, rocks split, and tombs broke open, allowing those who had trusted in the God Who had come into this world in Jesus, to walk free of death.

When the earth quaked again on Easter Sunday morning, the women no longer needed a theory about why Jesus died.

Heaven revealed it to them, just as God reveals His truth to anyone humble enough and desperate enough to hear it.

An angelic being, His appearance beaming with the brightness of God in His heaven, told them that Jesus was alive.

He had died to save us.

He died to be raised by the Father so that all who repent for their sin and trust in Jesus to save them, who become His disciples, will have the same resurrection victory gained by Jesus on the first Easter Sunday!

Jesus had earlier told the disciples that after He had died and risen, He would meet them back in Galilee. “After I have risen, I will go ahead of you into Galilee,” He had told them. (Matthew 26:32) The angel now gives the two women at the tomb their mission; they are to go quickly and tell the eleven remaining apostles so that they could make their rendezvous with the resurrected Jesus.

Without seeing the risen Jesus, the women believed that He had risen and they run off to do as the angel says, “afraid yet full of joy,” just as I felt in the office supplies stock room at Sears, just as I have felt countless times since:
Anyone to whom God has brought the gift of faith in Jesus knows what it means to be in the presence of Jesus, the crucified and risen God, and to be both afraid and full of joy.

You know that You’re not worthy of the sacrifice of love Jesus made for you on the cross. You know your sin.

But You know that His death and His empty tomb testify that, no matter your sin, God thinks that you are of infinite worth and value.

That’s why Jesus died and rose for you.

You know that by God’s grace through faith in Jesus, You are right with God for all eternity!

Soon after encountering the angel at the tomb, the faith of the women in Jesus and His resurrection is rewarded. Jesus meets them. “Greetings!” He says and the women, clasp His feet, offering Jesus the worship He deserves as God.

Jesus tells them, “Do not be afraid. Go and tell my brothers to go to Galilee; there they will see me.” (Matthew 28:10)

Friends, on this Easter Sunday, 2020, when our world is reeling under the weight of a lethal disease that threatens all of us, the resurrected Jesus speaks these same words and others to us now: “Do not be afraid. I am with you always until the end of the age. I am going ahead of you to a place I am preparing for you for all eternity. There you will see me. There, your fears will be forever erased and your faith in Me will be forever rewarded. Go tell the world and make disciples!”

Easter blows away all puny human theories about God, life, and death and replaces them with one, powerful, consoling truth: “Jesus is risen; risen indeed!”

That’s news of joy worth sharing! 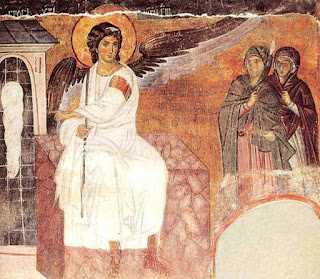 [See here for information on the icon shown above.]
Posted by Mark Daniels at 7:54 PM