Here's Sunday worship from Living Water Lutheran Church in Centerville, Ohio. Below the video is the manuscript for today's message. God bless you!

John 20:19-31
One day during seventh-grade English class, our teacher, Mrs. Biggs, told us that we were going to have a say in what book we would read together over the next six weeks.

She gave us three choices. I can’t remember what the other two were. But I do remember the one I definitely didn’t want to read: The Adventures of Sherlock Holmes by Sir Arthur Conan Doyle.

I thought I would be bored out of my skull if we read that book. But the vote for the Holmes stories was nearly unanimous.

Then I read the stories and got hooked. I read all twelve in the collection even before we were actually supposed to be reading them for class. I loved them for the puzzles they presented, the vivid characters, the strange plot twists, and the friendship of the brilliant Holmes and the sometimes clueless Watson. I couldn’t stop talking about the stories. And for Christmas that year, I received the complete Holmes collection: all fifty-six short stories and four novels. I still have that book!

Have you ever noticed how skeptics can become the biggest fans of something they once disdained? And it’s often these people who have what’s called “the zeal of a convert.” It’s often former skeptics who tell us the most about the things they once dismissed but have come to love.

Our gospel lesson for today, John 20:19-31, gives us a portrait of such a person. His name is Thomas. He was called to be an apostle of Jesus, one of the twelve Jesus would send into the world to witness that all who believe in the crucified and risen Savior will have eternal life with God and plant Christ's Church everywhere.

At the beginning of his gospel, John introduces us to Jesus, the Second Person of the Triune God, the one God in three Persons, Father, Son, and Holy Spirit.

Later in that same chapter, he says, “The Word became flesh and made his dwelling among us. We have seen his glory, the glory of the one and only Son, who came from the Father, full of grace and truth.” (John 1:14)

John spends the rest of his gospel recounting signs, sermons, and dialogs pointing out to those who dared to pay attention that Jesus was no ordinary man. They all demonstrated that Jesus was more even than the Messiah, the Christ, who God’s people had long-awaited. Jesus was God the Son in the flesh, the Creator becoming one of His creatures so that in His sinlessness, He could die for sinners and win eternity for all who believed in Him, their sins forgiven, made forever new.

Now, Thomas was with Jesus throughout Jesus’ earthly ministry. He knew that there was something special about Jesus. That’s probably why he kept following Jesus. But he refused to give in to the enthusiasm of faith. (The word enthusiasm comes from the Greek phrase, en Theos, in God.)

Thomas held back, determined not to get hoodwinked into giving his loyalty to anyone. Not even Jesus.

Thomas was there to see Jesus bring sight to the blind man who, when Jesus identified Himself as the Son of Man had told Jesus, “Lord, I believe” and proceeded to worship Jesus as God (John 9:38). But while others exhibited faith in and devotion to Jesus, however imperfect, Thomas folded his arms.

When Jesus announced His intention to go to Bethany after His friend Lazarus had died there, Thomas was less than enthusiastic. Bethany was in the heart of the territory from which Jesus and the twelve had just run for their lives. At Jesus’ announcement, Lazarus cynically told the others, “Let us also go, that we may die with him.” (John 11:16)

Even at the Last Supper, after Jesus had raised Lazarus from the dead and after Thomas had heard Jesus speak repeatedly of how He was going to Jerusalem where God the Father would glorify Him, through His death, resurrection, and ascension, Thomas asks Jesus, Who had told the disciples that they knew the Way He was going, “Lord, we don’t know where you are going, so how can we know the way?” (John 14:5)

When Jesus told Thomas, “I am the way and the truth and the life. No one comes to the Father except through me,” Thomas remained immune to Jesus’ Word (John 14:6).

After Jesus’ died and all hope of His being the Messiah seemed gone, the other disciples, grief-stricken and disappointed, nonetheless stayed together, probably drawing comfort from one another. Not Thomas. He was nowhere to be found on Easter Sunday morning. He had moved on.

Nor was he around on Easter Sunday evening when Jesus entered a locked room to greet the disciples and show them that He had conquered sin, death, and the grave for all who believe in Him. When, a week later, Thomas was told about several encounters Jesus’ other disciples had with Jesus raised from the dead, Thomas refused to believe.

I have a confession to make.

I can sometimes be a Thomas.

I live on the Easter side of Jesus’ time on earth.

I believe in Him as my Lord and King.

But sometimes I act and live as though the Word never became flesh and dwelt among us, that He never died to destroy the power of sin and death over me, that He didn’t rise to make me a new creature to whom He wills an eternity of good.

I can wake up and go through the next sixteen hours of my day like someone who never heard of Jesus. I can live like Jesus never died and rose for me. Like those who don’t know Jesus, I can stew over how things are going to turn out, forgetting that the Lord Who was raised by God the Father on Easter has believers and our ultimate destination in His strong grip, that Jesus has prepared a place for us with God in eternity and He will be with us every step of the way on this earth.

Can you be a Thomas?

Do you sometimes let unbelief, cynicism, skepticism, selfishness, or a kind of thoughtless, default atheism setting cloud your vision of Jesus, of Who He is, and of what He has done for you on the cross and from the empty tomb?

Today brings you (and me) good news!

Like John, the beloved disciple, who saw the empty tomb on the first Easter Sunday morning and believed, Thomas got his chance to see the risen Jesus on the following Sunday.

And when that happened, Thomas, the hardened skeptic, became the only person in the Gospel of John to make this ringing confession about Jesus: “My Lord and my God” (John 20:28).

No one had previously dared to say Who Jesus was (and is).

Thomas confessed Jesus not just our Lord. Not just the Lord Who conquered sin and death and Satan.

Thomas looked at Jesus and declared Jesus to be God!

Jesus says of believers like you and me, who have received the Word about Jesus that would be shared by the lives and martyrdom of witnesses like Thomas, Peter, John, Mary Magdalene, and Paul, “Because you have seen me, you have believed; blessed are those who have not seen and yet have believed.” (John 20:29)

Although like Thomas, we can doubt or be disbelieving or forgetful, we are blessed.

That’s because the truth of our faith in Christ is not measured either in how often we allow our human nature to get in the way of trusting in Jesus. It isn't measured in our imperfections.

Our faith is truly seen in this: in how, when confronted by Jesus in His Word, in the Sacraments, and in the fellowship of the Church, we realize again that this Jesus, this One raised from the grave on the first Easter, is Lord and God and His Word has transformed us from sinners dead in their trespasses and given us the saving faith to say with Thomas, “My Lord and my God!”

Friends, Jesus never tires of coming to us and always remains the Word made flesh, true God and true man, Whose desire above all else is to fellowship with us and make us His forever.

May we who, by the power of God's Word about Jesus, give us the zeal of converts, people who sold out to Jesus that we can't keep from telling the world about Jesus and His gospel. 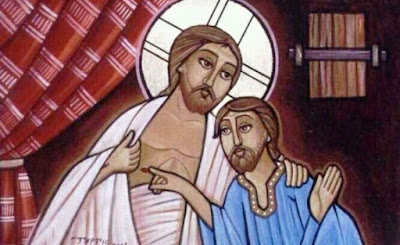