My daily quiet time with God for today took me to the four Gospels' accounts of the start of Jesus' ministry on earth. This includes Jesus' encounter with one of His fellow Jews, Nathanael.

When his friend Philip told Nathanael that they had found the Messiah foretold by the Law and the prophets and identified Him as Jesus, Nathanael was skeptical and dismissive. He asked Philip how anything good could possibly come from a backwater Galilean village. Philip invited Nathanael to come and see for himself. As soon as Jesus met Nathanael, He said the skeptic was "true Israelite, in whom there is nothing false."

We've seen that Nathanael was someone willing to speak his mind. But how, he wondered, did Jesus know about him? When Jesus explained that He had already seen Nathanael before called him, an indication of Jesus' omniscience, Nathanael, the dismissive skeptic who couldn't keep from speaking his mind, was sold. "Rabbi," he told Jesus, "you are the Son of God [confessing Jesus' deity]; you are the King of Israel [confessing Jesus as the anointed royal descendant of David]." (John 1:44-51) 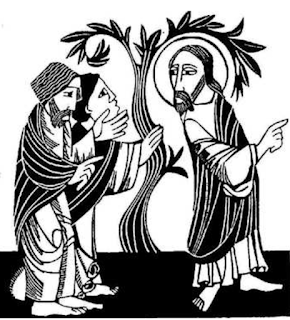 Nathanael reminds me of two other prominent figures who appear in John's Gospel.

The first is the Samaritan woman at the well outside the village called Sychar. After meeting and talking with Jesus, she runs into the village and tells people, "Come, see a man who told me everything I ever did. Could this be the Messiah?” (John 4:29) As had been true of Nathanael, this woman was willing to entertain the idea that Jesus was the Messiah because He exhibited the ability to know and want to be in relationship with her, despite her sins and world-weary skepticism.

In fact, I think it's true to say that if Nathanael represents Jews open to receiving Jesus as the Messiah, the woman at the well is the Gentile version of Nathanael. Despite having lived a life that made her believe that nothing good could come, not just from Nazareth, but from anywhere, she met the Word made flesh, God the Son, Who not only knew everything about her but also offered her salvation.

The second person in John's Gospel narrative of Jesus' ministry that seems to be foreshadowed is Thomas. John never calls him "doubting Thomas." He says that the recalcitrant apostle is "unbelieving Thomas." His sinfulness and world-weariness, seen in other places in John's Gospel, also militates against Thomas trusting in--believing in--Jesus. John, chapter 20, says that Thomas rejected the witness of other disciples that they had seen and spoken with Jesus resurrected. Thomas said that unless that he was able to touch the wounds of the risen Jesus, he would not believe any talk of Jesus' resurrection. Like Nathanael, who couldn't believe that anything good could come from Nazareth, Thomas couldn't believe that anything good could come from Jesus' suffering and death.

Famously, of course, the risen Jesus appeared to Thomas and Thomas made a confession like that of Nathanael, "My Lord and my God," he said (John 20:28).

When Nathanael confesses his faith in Jesus in chapter 1 of John's narrative, Jesus says, "You believe because I told you I saw you under the fig tree. You will see greater things than that...Very truly I tell you,  you will see ‘heaven open, and the angels of God ascending and descending on’ the Son of Man.” (John 20:50-51)

When Thomas confesses his faith to Jesus then risen from the dead, Jesus says, "Because you have seen me, you have believed; blessed are those who have not seen and yet have believed.” (John 20:29)

So, what do I take away from all of this?

First, I take away that despite my skepticism, sin, and inability to talk myself into trusting in Him, the God I know in Jesus knows all about me and wants me anyway.

Second, I think that it was because of their willingess to own the difficulty they found in believing in Jesus and the new life He brings to all who repent and believe, that Nathanael, the woman at the well, and Thomas were able to believe. None of them were lukewarm about anything. They were honest. When they thought something was hooey, they said so. When they believed, they were all in.

God can create and sustain faith in those who are honest with Him. As David tells God in his great psalm of repentance and belief, "Behold, you delight in truth in the inward being, and you teach me wisdom in the secret heart." (Psalm 51:6) This means that we must be willing to listen both God's Word of Law that condemns our sin and shows our need for repentance and God's Word of Gospel about the crucified and risen Jesus, which saves us from sin and death and creates in us faith in Christ that gives us eternity with God.

I emerge from my quiet time with God today with a renewed conviction that I need to be honest with Him. This is how He can wield His scalpel and administer His healing in my life.