Children of the Day: Jesus is Coming!

Below is the video of today's online worship service with the people and friends of Living Water Lutheran Church in Centerville, Ohio. Then, there's the complete text of today's message, taken from 1 Thessalonians 5:1-11. Have a good week. God bless you! 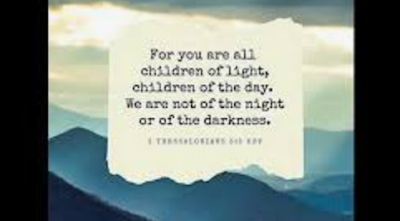 The wonderful Australian children’s book, Big Rain Coming by Katrina Germein, is set somewhere in the Outback where there’s been day after day of dry, dusty weather. One Sunday, Old Stephen, a wise Aborigine in a work shirt, jeans, and a broad-brimmed hat, points to distant clouds and says, “Big rain coming.”

But over the succeeding days, no rain comes. On Tuesday, it's so hot and dry that dogs dig holes in which they keep themselves cool. By Thursday, the frogs are so desperate for water they wait for some to drop onto their tongues beneath the rainwater tank. By Friday, clouds, black and thick are pressing in from the South. The skies echo with the sounds of thunder. But, there was no rain. Yet Old Stephen once more confidently says, “Big rain coming.” Finally, on Saturday, Germain tells us, rain comes: “Wonderful, cool, wet rain.”

Big Rain Coming is all about waiting for something that you know is going to happen, though you don’t know exactly when, and about the euphoria you inevitably feel when it happens just as you knew it would. Though there were hot and dusty days and nights to be endured, the people in Germein’s fictional Outback village knew that as soon as Old Stephen pronounced, “Big rain coming,” a refreshing deluge was on its way. They simply had to wait and trust.

Our second Bible lesson for today, 1 Thessalonians 5:1-11, comes from the apostle Paul’s first letter to the Christian churches gathered in people’s homes in and around the Greek port city of Thessalonica. It follows right after the second lesson from last Sunday. Both of the passages deal with the Day of the Lord, the day that God’s people had known about since Old Testament times, when the Messiah, the Christ, God’s anointed King, Who we now know is Jesus, will return to the earth, judge the living and the dead, and fully establish His eternal kingdom for all who repent and believe in Him. In last week’s lesson, Paul reassured the Thessalonian Christians that family and friends who died believing in Christ would, along with those believers still living, be brought into eternity with Jesus. In today’s lesson, Paul’s focus shifts.

Let’s look at what Paul says. “Now, brothers and sisters, about times and dates we do not need to write to you, for you know very well that the day of the Lord will come like a thief in the night. While people are saying, ‘Peace and safety,’ destruction will come on them suddenly, as labor pains on a pregnant woman, and they will not escape.” (1 Thessalonians 5:1-3)

Paul, using words and imagery used by Jesus Himself to describe the day when Jesus will return, tells the Thessalonians, “Look, you know that the Lord said that none of us need to know exactly when He will be returning.” For Christians, it’s enough to know that Jesus is coming. For a world going on about its business, heedless or unaware of Jesus, God in the flesh, Who offered His sinless life in sacrifice for all human sin and was  raised by God the Father to open eternity to all who repent and believe in Jesus, His return will come “like a thief in the night.” Paul says that people in the unbelieving world will be telling each other, “Peace and safety,” a favorite Roman political slogan like Joe Biden’s Build Back Better or Donald Trump’s Make America Great Again. The unbelieving world, in other words, will be so focused on getting along and getting ahead in this world, that their destruction, God’s judgment for failing to take refuge in Him through faith in Jesus Christ, will come on them suddenly.

But for the believer in Christ, the prospect of Jesus returning holds out only joy, eternal joy. Paul writes: “But you, brothers and sisters, are not in darkness [today, Paul might say that disciples of Jesus aren’t ‘in the dark’] so that this day should surprise you like a thief. You are all children of the light and children of the day. We do not belong to the night or to the darkness. So then, let us not be like others, who are asleep, but let us be awake and sober. For those who sleep, sleep at night, and those who get drunk, get drunk at night.” (1 Thessalonians 5:4-7)

According to the imagery Paul uses here, unbelievers are children of the dark. In the dark, guards who should be on the lookout, nod off. In the night, some get drunk, as was true of the followers of the favorite idol of the surrounding Thessalonian culture, Dionysius, the deity of wine and loose living.

But Christians, Paul says, are people of the light, people who see God and life and the world clearly. As surely as Old Stephen saw that a big rain was coming, bringing refreshment and renewal, disciples of Jesus see that Jesus is coming back to this world to bring His perfect, everlasting Kingdom to all who have waited with hope and faith in Him alone.

As people who live in the light of Jesus then, how are we to live? Does God give us a bunch of do’s and don’t’s? No. Waiting for Jesus, Christian faith, isn’t about putting ourselves on a program of moral improvement, as though we could will ourselves to be better people worthy of Jesus and His kingdom. As Paul reminds us elsewhere: “... it is by grace you have been saved, through faith—and this is not from yourselves, it is the gift of God— not by works, so that no one can boast.” (Ephesians 2:8-9) And Jesus tells us more simply, “The work of God is this: to believe in the one he has sent.” (John 6:29)

So, Paul explains how we’re to prepare for Jesus’ return and the final judgment of the world: “...since we belong to the day, let us be sober, putting on faith and love as a breastplate, and the hope of salvation as a helmet. For God did not appoint us to suffer wrath but to receive salvation through our Lord Jesus Christ. He died for us so that, whether we are awake or asleep, we may live together with him.” (1 Thessalonians 5:8-10)

We’re to “put on,” that is, receive and live in the faith with which only God can cover us. We’re to put on the self-giving, self-emptying love with which only the God we know in the crucified Jesus can supply us. We’re to receive and wear day to day, the salvation from sin and death that only Jesus can give us. Faith, hope, and love aren’t things we can manufacture. We receive them from Jesus Christ alone through simple means. First, through God’s Word, as we read it or hear it. And second, through the Sacraments, Holy Baptism and Holy Communion, through which Jesus comes to us to, in the first instance, claim us for God, and in the second, to sustain us in our faith, and in both, to cover us in the forgiveness for sin and new life Jesus died and rose to bring to all who believe in Him. We receive them and, like those who heard Old Stephen’s prophecy of a big rain coming, we wait and trust.

Friends, Jesus is coming! That is good news. Keep living in His light. Turn from sin and turn to Him. He will cover you with faith, hope, and love and you, children of the light, will be ready for that day when He returns and you see your Lord face to face. Amen