Willing to be "scum of the earth, the refuse of the world"? 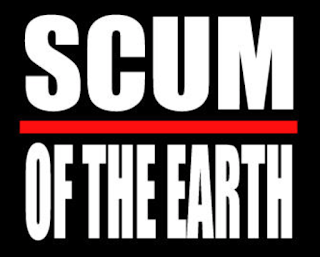 [This is the logo of a congregation in Denver, Scum of the Earth Church. The inspiration for its name comes from the New Testament.]
During my morning quiet time with God today, I was struck by these words: "...we have become the scum of the earth, the refuse of the world." (1 Corinthians 4:13)
Paul writes these words to the churches in Corinth in first-century Greece. Many Christians there had become "partisans" of their favorite preacher, some of Paul, who had been with them earlier, and others of Apollos, who had come along later. They would say things like, "I follow Paul" and "I follow Apollos."
Paul upbraids the Christians there for this. "What, after all, is Apollos," he asks. "And what is Paul? Only servants, through whom you came to believe..." in Christ. (1 Corinthians 3:5)
If we make ourselves partisans of this person or that person, this party or that one, this philosophy or that one, we're following the same foolish pathway that causes problems in the world: The tendency to make mortal, dying, impermanent, and sin-filled people or philosophies our gods, the grounds of our being. Human beings, human aspirations, human values, human philosophies: None of them can save us from ourselves, our sin, our death, no matter how much wisdom the world may attach to some people, philosophies, or ways of life.
The world may consider it foolish to follow Jesus. But what we see in the crucified and risen Jesus is that "Salvation is found in no one else, for there is no other name under heaven given to mankind by which we must be saved.” (Acts 4:12) Jesus, true God and true, sinless human being, rescues us from sin and death. He shares our condemnation, though He doesn't deserve it, so that, through faith in Him, we can share in His vindication--His resurrection life with God the Father--though we don't deserve that.
And what does He save us from?
Jesus saves us from the foolishness that says we can overcome our sin and all the death and destruction it brings to the world by following mere human beings, human thoughts, human emotions, human philosophies, however exemplary they may seem to be.
Paul said that he and all his Christian sisters and brothers who shared Jesus with the world understood the score. They would never be popular. They would never be seen as wise or with it to a world on the make. It's not always a popular message to be told that we can't make it on our own, that we need a Savior. Millions have been killed for believing in and sharing that message. There are tens of thousands of Christians in places outside of America that are being persecuted, jailed, tortured, and bombed for believing in and sharing that message.
But Paul said that he and his apostolic companions were willing to be "the scum of the earth, the refuse of the world" for the surpassing, eternal privilege of being part of God's eternal kingdom solely through God's grace granted to all who believe in Jesus.
He said they were willing to accept the world's estimation of them as scum and refuse for an additional privilege: being able to share with others the good news--the gospel--of new and everlasting life for all who turn from sin and the worship of the world's dead and dying things and turn instead to Jesus for forgiveness, peace with God, and everlasting life with God.
Father, grant that today, I won't give a fig about the world's estimation of me. Make me willing to be regarded as scum and refuse by the world because I know that in Jesus Christ, by Your charitable grace, I belong to You now and always. In Jesus' name I pray. Amen