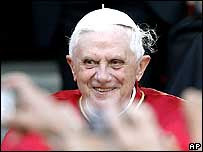 Charlie Lehardy, one of the best bloggers around, points out that there really is no reason for Muslims or anyone else to have taken offense to Pope Benedict XVI's passing reference to Islam during his lecture in Regensburg:

The Pope was not bashing Islam but making an illustration of an important difference between Islam and Christianity: Muhammed taught that violence and bloodshed were tools Allah would use to spread the faith; Christ taught that God expects us to live at peace with all men, in love and humility — even unbelievers.

Lutheran theologian Carl Braaten once pointed out that Muslim leaders and those representing other faiths frequently become frustrated with Christian theologians with whom they have interreligious dialogs. Too often, these people told Braaten, Christians were apt to soft-pedal the uniquenesses of Christian faith or the claims of Jesus to be the way to God. "Stop doing this," representatives from other faiths said. "What's the point of a dialog if Christians aren't accurately representing our faith?"

The Muslim religious and political leaders who whipped the uninformed masses into a frenzy of hatred last week would apparently not be in sympathy with erudite, reasonable Muslim leaders Braaten cited.

Pope Benedict, rightly or wrongly, made a statement, quoting somebody else in passing. A statement in response from members of the diverse Muslim community, as part of a civilized dialog, was appropriate. The torching of churches, death threats against the Pope, or the murder of a nun were not appropriate.

We Christians believe that Jesus is God in the flesh, Who offers forgiveness of sin and everlasting life to all who turn from sin and trust in Him as Savior and Lord. We hope--we pray--that all will experience the new life we believe Jesus gives as a gift of grace to those who believe in Him. If people don't agree with our confession, that's okay. But violence and irrationality aren't okay!

Lehardy points out that Islam and Christianity make competing truth claims. But that's no license for people in either camp to try to bully others into staying mum in expressing their belief.
Posted by Mark Daniels at 10:30 PM