The Grayson Letters and Presidential Health 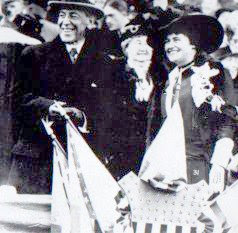 The Washington Post has an interesting piece on a bombshell revelation that in 1918, well before suffering from the stroke that debilitated him for the last two years of his second term as President, Woodrow Wilson underwent surgery that his physician regarded as life-threatening.

The discovery was made in the letters of Dr. Cary T. Grayson, recently given by his heirs to the Woodrow Wilson Presidential Library in Staunton, Virginia, Wilson's birthplace.

"The patient is progressing most satisfactorily, so far, and I have good reasons to hope for a most beneficial result. It has been a big undertaking. . . . No one knows anything about it except Miss E., Miss Harkins, Hoover -- It is one secret that has been kept quiet, so far, and I think it is safe all right now," the doctor wrote Alice Grayson in a July 16 [1918] telegram.

The episode, which caused Grayson great anxiety, most likely involved an operation to remove polyps from the president's nose, according to Michael Dickens, a Charlottesville physician familiar with Wilson's medical history and the telegram. Historians say the telegram indicates that the procedure was then known only to Grayson; the president's wife, Edith Wilson; a nurse; and a White House usher [Ike Hoover].

It's long been suspected that Wilson, who suffered from headaches for years, had one or more--most probably undiagnosed--strokes before becoming President. It's thought that a major incident happened when he was on the faculty of Princeton University. He may have even suffered from a nervous breakdown in his pre-presidential years.

Of course, a stroke that hit Wilson in October, 1919, during a speaking tour in which he pushed for US entry into the League of Nations precipitated a major constitutional crisis. The public was unaware of that fact at the time. Through the balance of his second term, which ran to March 3, 1921, Wilson was an invalid. He found it difficult to work or talk. In many ways, his second wife, Edith Bolling Galt Wilson, who he married in 1915, was the acting President in this period.

But that Wilson had been frail well before his stroke was unknown until the Grayson letters were donated to the Wilson Library.

The WaPo article cites another dramatic Grayson letter, written even earlier, in August, 1915:

"My number one patient in this house had an accident last night with one of his eyes -- the good one, which is bad now. I am hurrying off to Philadelphia with him at six o'clock tomorrow morning to consult an eye specialist. We are going by motor. I think we can make the trip less noticeable in this way -- . . . [T]he papers will read something like this: The President made his annual visit to the oculist etc etc."

The letter was written during Wilson's first term at a time when many historians believe he was relatively healthy.

The article goes on to say that in April, 1919, six months before Wilson's paralytic stroke, a Grayson letter recounts:

"The president was suddenly taken violently sick with the influenza at a time when the whole of civilization seemed to be in the balance. And without him and his guidance Europe would certainly have turned to Bolshevism and anarchy. From your side of the water you can not realize on what thin ice European civilization has been skating. I just wish you could spend a day with me behind the scenes here. Some day perhaps I may be able to tell the world what a close call we had."

There have been other presidential health cover-ups, of course. Grover Cleveland had a major surgery on his mouth while President. In a procedure only revealed years after Cleveland's second term, the President went on a summer trip. The press was told that Cleveland was vacationing. But the trip was really a rendezvous with a doctor who removed a major cancerous tumor from the President's jaw. Much of the bone was also removed. Cleveland needed to be fitted with a special rubber device. He spent much of the summer learning how to speak again.

Because of concerns that a "crippled" man couldn't serve as President, Franklin Roosevelt learned to fake walking and standing upright even though he was paralyzed by polio in August, 1921, eleven and a half years before being elected President for the first time.

Interestingly, President George Washington was nearly killed by a smallpox epidemic that swept through New York City, then the nation's capital, during his first term. But no attempt was to conceal his illness or its gravity from the public. As in almost any other leadership category you can name, in this too, Washington sets an example that other Presidents would do well to emulate.

Several Presidents survived their terms, but probably worked themselves to early deaths. That was certainly true of the relatively young James K. Polk, who died about three months after leaving office. He was fifty-three, a spent, exhausted man.

Something similar happened to Chester Alan Arthur. He succeeded to the presidency after the assassination of James A. Garfield and served until March 3, 1885. He died on November 18, 1886, at age fifty-six.

Roosevelt's cover-up is understandable, I think; he was, after all, refusing to cede his future to a prejudice against those who suffer from physical disabilities And Polk and Arthur simply made the same mistakes that many leaders have made through the centuries, deeming themselves so indispensable that they simply refused to delegate. Polk, who presided over the Mexican War among other things, said that he preferred to handle all the details of executive administration himself. He paid a high price for this preference.

More indefensible than Polk's and Arthur's workaholism though, were the Wilson and Kennedy health cover-ups. If there was in those days the sort of disclosure and concern about presidential health that we have today, it's doubtful that John Kennedy would have even been elected in 1960.

These newest revelations about the state of Wilson's health make me wonder if, under the current requirements that Presidents undergo annual physicals, the results divulged to the public, he would have been renominated in 1916.

Wilson was a passionate figure. Though brilliant, charismatic, a fine orator, and a renowned scholar of US History and politics, he also was willful and stubborn to the extreme. A pattern of early success, followed by failure due to an unwillingness to compromise, exhibited during his time as president of Princeton University, was repeated during his brief tenure as New Jersey Governor and then as President.

At Princeton, the issue that brought Wilson into disfavor was "reform" of the educational process he proposed. When alumni and other major donors raised objections, Wilson didn't look for compromise. He instead sought to use his oratorical skills to win people over. His efforts were foundering when the New Jersey Democratic Party, wanting to us a Progressive face to cover up its corrupt practices, asked Wilson to be their gubernatorial candidate. Wilson jumped at the offer.

The bosses thought that they could control the college professor. But as soon as Wilson took office in 1911, he successfully overrode those responsible for getting him elected the previous November and secured passage of an impressive package of progressive reforms. However, in his second year, Wilson, who always overplayed his hand, was thwarted in passing more reforms. His all-or-nothing approach meant that throughout 1912, he was handed defeat after defeat by the alienated Legislature and enraged machine.

No matter, though, because 1912 brought Wilson the Democratic presidential nomination. It was a fairly sure shot at the White House for Wilson because of a Republican rupture: Incumbent William Howard Taft was the nominee of the GOP; Taft's one-time sponsor, Theodore Roosevelt, was the nominee of the Progressive Party. The GOP was split, leaving an opening for the weaker Democratic Party nominee.

In 1912, election to the presidency allowed Wilson to ride out of Dodge--Trenton--in the same way that the governorship had allowed him to leave Princeton. Wilson's first four years as President were relatively successful. But World War One brought out both his latent greatness and his self-destructiveness.

When the war ended, he insisted on traveling to France for the treaty negotiations, which he hoped would be based on his Fourteen Points. That meant that the critical presidential business of maintaining relationships with a Republican Congress went undone while the chief executive was away. Then, at a critical juncture in the negotiations, Wilson's alter ego, Edward House, negotiated with the American Allies. Wilson felt that House gave too much of his program away. Furious, Wilson broke with House, the man who orchestrated his nomination in 1912.

After the Treaty of Versailles was consummated, incorporating Wilson's League of Nations, the President threw himself into pushing for Senate approval. Wilson insisted on more than passage of the treaty, though. Its every jot and tittle, without change or amendment, would have to be accepted, he said.

Having set the definition of victory at the all-or-nothing level, Wilson began his speaking tour in Columbus. It was later in Colorado that he was felled by the stroke that effectively ended his presidency. The treaty was rejected by the Senate, the US didn't join the League of Nations, and Warren Harding of Ohio was elected President on a platform of returning to "normalcy."

Throughout a career marked by self-defeating intransigence, Wilson had various health problems. So, in a way, it comes as no surprise that his health caused Dr. Grayson so much concern well before the famous stroke.

But what especially interests me in these newly-revealed letters is how, before twenty-four hour news channels or independent bloggers with immediate access to the worldwide web, it was possible for Presidents to conceal the state of their health not just for days, but years.

Since you have an interest in presidential health, I think you'll enjoy our new book "FDR's Deadly Secret". It is very reminiscent of WW and actually has considerable connection to it through Cary T. Grayson.

Steven:
Thanks for reading this post and for your comments.

A short time ago, I read Jean Edward Smith's biography of FDR. He writes at some length about the concern of physicians for Roosevelt's health and just how reckless they had been with the matter. FDR seemed to be in complete denial to me.