"There is a point where the simple answer must yield to the truth." 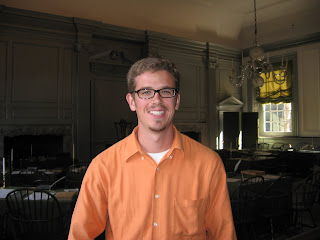 That's what my son, Phil Daniels, says in a fine essay on prayer. It isn't just because he's my kid or because he quotes Ole Hallesby--although those are two factors very much in Phil's favor--that I recommend that you go to his site and prayerfully consider what he has to say.

[By the way, the picture of Philip was snapped at Independence Hall in Philadelphia.]
Posted by Mark Daniels at 10:44 PM

Email ThisBlogThis!Share to TwitterShare to FacebookShare to Pinterest
Labels: Prayer

Excellent essay, I was very impressed by your son's ruminations. Gave me lots to think about even though I'm not doing it from a Christian perspective. I'm "kvelling" and I'm not even related!

P.S. And what a handsome kid!