Letting Christ Shine (Part 4, Reaching Up, Reaching In, Reaching Out)

[This is the fourth midweek Lenten devotional message prepared to be shared this evening with the people and friends of Living Water Lutheran Church, Centerville, Ohio.]

In Matthew, chapter 5, Jesus says: “You are the light of the world. A town built on a hill cannot be hidden. Neither do people light a lamp and put it under a bowl. Instead they put it on its stand, and it gives light to everyone in the house.”

In these words, Jesus tells us something very important about being a disciple: We cannot be stealth Christians.

We’ve been saved by God’s grace through our faith in Christ not only for our own eternal salvation, but also so that we can be His light for others, so that others can know the life with God that only Jesus Christ can give. In 1 Peter 2:9, the apostle Peter tells believers that we have become God’s people so “that [we] may declare the praises of him who called [us] out of darkness into his wonderful light…”

The greatest tragedy in the world today is that Christians, who have the light of the gospel--the good news of new life for all who repent and believe in the crucified and risen Jesus, often decide not to live out our faith so that others can see the Lord Who saves us.

In His illustration about a lamp being put under a bowl, Jesus is intimating that the tragedy that ensues from Christians failing to live out their faith publicly is twofold.

The first part of the tragedy is that others who need Christ don’t meet Jesus through us. Eternity is denied to people by Christians who fail to show Jesus to them.

The second part of the tragedy is that the light of faith within us is put out. Christian faith that isn’t shared is faith in danger of dying. Keeping our faith in the open feeds our faith in the same way that oxygen feeds a flame, allowing it to keep giving light to a room.

Above all, I think that Jesus wants us to know that faith is not a private matter. Our lives are to be turned outward to a world in need of the God we know in Christ.

This is how it has always been with God. In Micah 6:8, God’s ancient people were told: “He has shown you, O mortal, what is good. And what does the Lord require of you? To act justly and to love mercy and to walk humbly with your God.” 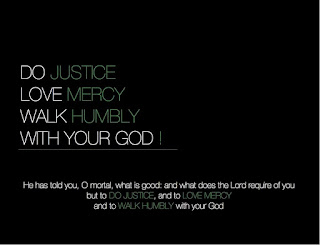 Faith in Christ is something to be shared in how we treat people, how we serve people, and the way we stand for justice not for ourselves, but for others.

Jesus never spoke a word to His accusers in His own defense. But He always spoke and acted in defense of others, even the most despised sinners.

Disciples of Jesus reach out to others with acts of love and compassion. They fight for the well being and the eternal lives of their neighbors.

Reaching out has another dimension, of course. We’re to tell others about Christ. A few moments ago, we heard Matthew 28:19-20. It contains what we call the great commission, Jesus’ command that we make disciples. We are to cast the light of Jesus on others so that they can believe in Him and so, live with God too.

The book of Acts in the New Testament tells us that after a man named Stephen became the first Christian killed for his faith in Christ, a general persecution of the church began in Jerusalem. The apostles stayed in Jerusalem, but the rest of the Church scattered, reaching out to others with the Good News of Jesus as they did.

We’re told about a layperson, Philip, who went, oddly enough to Samaritans, people his fellow Jews hated, and shared Christ with them. While Philip busily made disciples among the Samaritans, God sent him to an Ethiopian, the treasurer for a queen. Philip explained the Good News of Jesus to him. The Ethiopian came to believe in Jesus. And at a pool of water, Philip baptized the man.

The moral of that true story is simple: It isn’t just the Church as an entity that’s to be about reaching out to make disciples, it’s each of us as believers in Jesus who are to be about this mission! As one author has put it, both churches and individual Christians need to be "missional."

Before we close, I want to say two things about the reaching out aspect of discipleship that I feel must be underscored.

The first is this: Reaching out is not about the institutional survival of the Church. I’ve heard of some Christians who tell their pastors, “We’d better get more people in here or this church will die.”

Now, we are blessed to be part of a spiritually-thriving and financially strong congregation.

But frankly, I don’t think Jesus cares about whether the human institutions we associate with church survive or thrive.

When Jesus thinks of the Church, He doesn’t think of buildings or altars, candles or building funds. For Jesus, the Church is the people who follow Him. Period.

The second thing I feel the need to underscore is this: Reaching out doesn’t just happen through programs of the institutional Church. The church often unintentionally lays guilt, for example, on the parents of young children or of teens, by seeming to insinuate that if they aren’t involved in mission trips, or soup kitchens, or other outreach programs, they’re not being faithful to Jesus’ command that we reach out to others in His name.

Parents who are discipling their children to follow Jesus are reaching out. They’re reaching out to their kids. The church should be hailing such parents as heroes, not making them feel guilty.

As another example, people who offer to pray in the name of Jesus with and for co-workers or classmates going through tough times are engaged in very impactful reaching out, even if they don’t do these things with a church group. 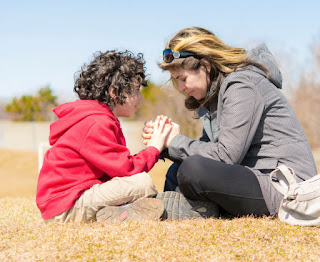 Reaching up and reaching in, elements of Christian discipleship that happen often among Christ’s family, the Church, are vital for us. But reaching out is something every Christian is called to do on their own, with the Church fellowship AND on our own beyond the walls of the Church.

For some, reaching out will mean going to Haiti, Chevy Chase, India, or being involved with Upward. And we should all thank God for people involved in such ministries and support them through our prayers and our dollars. But we should also celebrate those disciples among us who are sharing their faith and their prayers with family members, friends, coworkers, and classmates.

Reaching out is not about programs of the church; it’s about passion for those who are hurting and for those who will be lost for eternity without faith in Jesus Christ.

However we reach out in Jesus’ name, we fulfill our call as disciples.

You, Christians, are Christ’s light to the world. However you feel called to let it shine, never hide it. Reach out so that the world--your world--will know the God Who so loved it and all the people in it, that He gave His only Son so that all who entrust their lives to Him by faith will have life with God for eternity. Amen 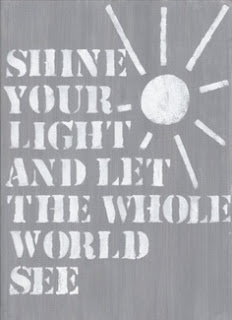