The only one whose opinion matters 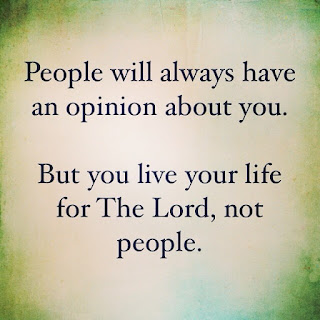 Public opinion is fickle and people will like or dislike you for lots of reasons, most of them unfair.

A few years ago, I wrote a song inspired by the circumstances of several people I'd known through the years who were falsely accused of financial shenanigans, one at a corporation, the other at a public entity.

In each instance, the media reported the allegations while the accused were forced by legal realities to refrain from comment.

Meanwhile, their communities were abuzz with unkind rumors of all manner of illegal, nefarious, and immoral activities of which my acquaintance was supposedly guilty.

In both cases, I felt like I was watching a game of telephone, a tumbling profusion of lies, sparked by, in each instance, one unproven allegation. Every time I tried to correct the false information, I was treated either as naive or complicit with wrongdoing.

You know, it isn't just the American system of jurisprudence that holds a person to be innocent until proven guilty, the God of the universe expects us to treat rumors, even allegations from public officials, as false until proven otherwise. In the eighth commandment, God says, "You shall not bear false witness against your neighbor." In his explanation of this commandment, in The Small Catechism, Martin Luther writes:


We are to fear and love God so that we do not betray, slander, or lie about our neighbor, but defend him, speak well of him, and explain his actions in the kindest way.

We need to be told this kind of thing, of course, it's foreign to our nature to give others as much consideration as we expect for ourselves.

But fallible human beings clearly aren't the ones whose opinions about us should matter most in our lives.

My song starts out:

I've seen that this is often true. People say uncharitable things about others because, in doing so, they make themselves feel superior. They're looking for affirmation in all the wrong places.

We make a mistake when we allow the opinions of others about us to rule our choices and behaviors. The only One Whose opinion of us matters is God. He will judge our lives, not other people.

The great news in all of this is that God judges those who turn from sin and turn in faith to Jesus Christ with grace. He will do that even for people who are guilty of the sins that others gossip about. He will even forgive gossipers and would-be judges who repent and trust in Christ alone as their judge, God, and King.

Jesus frees us from the changing whimsies of others' opinions of us, roots us in love and life for eternity, and sends His Word and His Holy Spirit to guide us toward living according to God's will, not others' will, not our own. In this, there's freedom.

None of this means we should ignore the opinions of other people altogether. When loved ones or mature fellow church people speak the truth in love to us about perceived wrongs or bad judgment on our part, we should listen; they may be speaking God's truth to us. Christians, in particular, voluntarily live in a community of mutual accountability with their fellow Christians. Where this mutual accountability exists, we actually have more freedom not less, as God uses Christian community to set us free from sin and relational acrimony.

In any case, our ultimate Judge is God. And His desire is to set us free...if will let Him.

[I don't know where I got this graphic. I saw it a year ago, liked it, and kept it. Apologies if I have violated any copyright laws.]