1 hint on how to read the Bible

One important principle for reading the Bible:

The first question is a hedge against self-righteousness that would destroy our relationship with God and others, driving us instead to repent and be reconciled with God.

The second is a hedge against against despair, helping us to remember that we are also part of that world for whom God the Father sent His Son and for Whom the Son Jesus died and rose. His grace incites us to fall into the eternal arms of the God Who loves us with an unquenchable passion.

The upcoming Christmas season, which begins in two days, is a great time to get to know God through the reading of His Word. But one other hint: Reading the Bible is best done in association with a group of friends who read the same passages each day, then gather once a week to reflect on the Scriptures, learn from each other's insights, pray together, share their highs and lows, especially in light of what God is teaching them through His Word, and, of course, be a part of a local church family. We were made for fellowship with God and others. 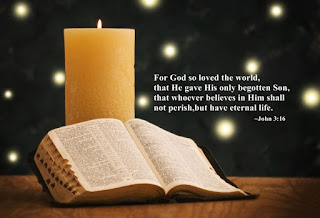 Email ThisBlogThis!Share to TwitterShare to FacebookShare to Pinterest
Labels: John 3:16-18, Law and Gospel, The Bible