Christmas and What God Wants Most of All

Matthew 1:18-25
It’s not a new observation to say that the beginnings of things often explain a lot about their later development. How a thing is begun is that important.

Our Gospel lesson for today gives us Matthew the Evangelist’s account of the beginnings of Jesus' time on earth and of the new beginnings God can give everyone through Jesus Christ. Take a look at our lesson for today, Matthew 1:18-25. 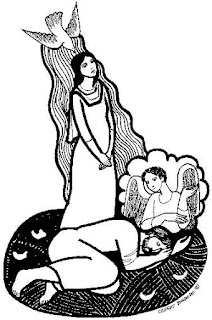 The verse goes on: “His mother Mary was pledged to be married to Joseph, but before they came together, she was found to be with child through the Holy Spirit.”

The English phrase pledged to be married doesn’t do justice to the state of Mary’s relationship with Joseph. They were betrothed. Betrothal in those days was more than an engagement. During betrothal, the couple were considered married, although they were strictly forbidden from consummating their relationship until they publicly affirmed their commitment to one another before God and witnesses.

If one of them had intimacy with someone else during betrothal, that act was considered adultery. The Old Testament book of Deuteronomy said that if a woman was guilty of adultery during this period, she should be stoned to death. By the first century AD, this law was rarely enforced. But even then, the woman divorced by her betrothed, however quietly it was done, didn’t have an easy lot in life, forever branded by her adultery.

Our lesson though conveys an unambiguous message: Despite, Joseph’s suspicions, Mary was a virgin. She and Joseph had not, we're told, come together. And, the child conceived within her was from the Holy Spirit.

Later in the passage, we’re told that Mary and Joseph didn’t have marital relations until after Jesus was born.

Today, as was the case when Jesus walked the earth, there are people who deny that Jesus could possibly have been born of a virgin. Even some church-goers deny the virgin birth. But it’s presumptuous to deny that the God Who created every particle of this universe is incapable of doing something that doesn’t comport to our usual experience. Jesus teaches that, “with God all things are possible.” [Matthew 19:26]

Still, some virgin birth deniers point out that other ancient religions told stories of their idols roaming the earth and having intimate relations with women, often resulting in the birth of notable persons, like the fictional Hercules. They say that the claim that Jesus was born of a virgin is similar.

But the witness of the New Testament about God the Father and about Jesus’ birth is very different from those mythical gods. During His ministry, Jesus said that “God is spirit” The God of the universe isn’t like the bawdy deities of mythology. He is Spirit, Who by His Word created matter, created human beings.

Just as the book of Genesis says that God’s Spirit moved over chaos and brought life into being, so now, as God prepares to gives us the chance for new life through Jesus Christ, His Spirit passes over a virgin’s womb and the Person the apostle Paul calls, “the second Adam,” is conceived.

If this is hard for us to accept, imagine the effect it had on Joseph! Verse 19: “Because Joseph her husband was a righteous man and did not want to expose her to public disgrace, he had in mind to divorce her quietly.”

Hurt by a woman he believes has violated God’s will that sexual intimacy be confined to marriages between men and women, Joseph decides he won’t lash out. But he also won’t have a life with a woman he believes has been unfaithful to him. The verb translated as divorce here in the original Greek is apoluo, meaning literally, loosed from. Joseph was going to cut Mary loose.

Verse 20: “But after he had considered this, an angel of the Lord appeared to him in a dream and said, ‘Joseph son of David, do not be afraid to take Mary home as your wife, because what is conceived in her is from the Holy Spirit. She [Mary] will give birth to a son, and you are to give him the name Jesus , because he will save his people from their sins.’ All this took place to fulfill what the Lord had said through the prophet [in Isaiah 7:14]: ‘The virgin will be with child and will give birth to a son, and they will call him Immanuel’--which means, ‘God with us.’"

In a fallen world, it’s imperative that those who believe in Jesus know God’s Word! First Peter 5:8 warns believers: “Be alert and of sober mind. Your enemy the devil prowls around like a roaring lion looking for someone to devour.”

If we aren’t like Joseph, on intimate terms with God and His Word, we won’t recognize when God is acting in our lives. We won’t be able to resist temptations that when acted on, can drag us down to hell.

Like Joseph, we need to know the God we meet in Jesus Christ so well that even when things don’t make sense, we will keep following Him!

I hope that every member of Living Water will make it their business to know God through regular Bible reading and study, including such time with fellow disciples of Jesus!

Now, in these verses, Matthew mentions two names associated with the Child in Mary’s womb. Matthew does so because in Biblical times, names were very important. For example, the name of Jacob, that notable schemer in the Old Testament, means literally, he grabs the heel, a way of saying supplanter or usurper. If a name ever suited a person, that of Jacob, this man who connived to steal his brother's inheritance, did.

But even today, I'm convinced, the names we call people or circumstances have a way of sticking and meaning something. Ann and I have two versions of how we came to name our son, Philip Martin. As I recollect, the name began with me sitting in the library of the seminary where I was a student and thinking, Philip Melancthhon and Martin Luther, the names of the two eminent theologians of the Reformation and colleagues on the faculty of Wittenberg University in Germany. And because Martin was also Ann's maiden name, it seemed perfect.

Oddly enough, our son Philip always seemed like a natural born theologian. Even as a young boy, he would ask me the most probing faith questions that I found hard to field. And when he was in college, he was given two different nicknames: Phil the Lutheran and Phil the Philosopher. He has always seemed to be to have lived up to his given names.

This past June, when we went to Walburg for his installation as pastor of Saint Peter Lutheran Church, we were given a tour of the church building. The sanctuary had traditional stained glass windows, most of them showing Biblical scenes and events. All but two, that is, because in the front, to the left of the altar, were two windows: one showing Philip Melanchthon and the other showing Martin Luther.

Maybe the names we call each other do matter.

At the very least, God seems to think so. In our lesson, we're told of two names applied to the Messiah conceived in Mary's womb.

First: Jesus, the Savior’s given name. It means Yahweh, [God], is our salvation. Jesus’ given name says that God sent Jesus to save His people from sin.

“The wages of sin is death,” as we know. But Jesus came to take the wages we deserve--death, condemnation, separation from the God Who gives life. Then He rose from the dead so that all who believe in Him have the gift we don’t deserve: Never-ending life with God.

That’s also why Living Water has adopted Matthew 28:19, which gives Jesus great commission as the only mission statement we need: “Therefore go and make disciples of all nations, baptizing them in the name of the Father and of the Son and of the Holy Spirit, and teaching them to obey everything I have commanded you.”

Jesus came to save all who turn from sin and trust in Him.

Second: Matthew also tells us about the name Immanuel.

It’s a nickname, really. Like many nicknames, it’s descriptive. As the text says, Immanuel (in all its varied English spellings) means God with us. Jesus is God with us today, now, in this world.

In those two names--Jesus and Immanuel--we find everything that makes Christmas worth celebrating!


The hope of heaven that Jesus gives to His disciples imbues this life with joy even when we’re unhappy or guilty, assures us of peace even when things are crazy.

In Romans 8:1-2, the apostle Paul conveys this amazing promise: “Therefore, there is now no condemnation for those who are in Christ Jesus, because through Christ Jesus the law of the Spirit who gives life has set you free from the law of sin and death.”

That, friends is the good news that came when God was virgin born of Mary and Joseph accepted the responsibility of acting as His father on earth. If we want Him, we are saved and accompanied always by Christ!

Welcome Jesus as Mary and Joseph did, ignoring the wagging tongues and the warped reason of a world that wants to sell God short and feed human ego.

Welcome Him into the center of your lives.

Let Him save you.

Let Him live with you every day.

Because of all the things the God of this universe wants, He wants you most of all!

Let that truth soak into your heart and mind this Christmas and every day!