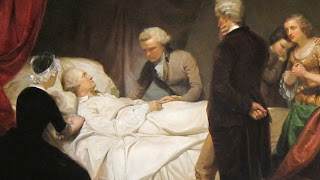 The last time I visited Mount Vernon I became choked up when standing in the bed room in which Washington died. Having read many accounts of the death scene, I knew that his passing was as noble and unassuming as the man himself had become over the course of his life.

Historian Garry Wills once asserted that Washington was the greatest political leader in the history of the world. I agree. By his example, he demonstrated that executive leadership need not be authoritarian and that it can be passed along to a successor democratically and peacefully. Every American owes Washington an enormous debt of gratitude.

There are two Washington biographies I especially recommend:

Email ThisBlogThis!Share to TwitterShare to FacebookShare to Pinterest
Labels: George Washington, the presidency