Calvin Coolidge, his dad, and the majesty of Constitutional Democracy

While Calvin Coolidge was out of his depth as president, particularly as it relates to understanding the twentieth century's new economic realities, I've always admired him as a person.

The story of his swearing-in has been a favorite since I first read it when I was a boy. It captures the simple majesty of US constitutional democracy and George Washington's great legacy to our country, the peaceful transfer of executive power.

One highlight of a tour of New England several years ago was seeing the room in which Coolidge's father administered the presidential oath of office to his son. I literally got goosebumps.

The tale was recounted again yesterday in a post from the White House Historical Association:


John Coolidge received several telegrams during the early hours of August 3, 1923, all of which bore the same message: President Warren G. Harding was dead.

This meant that John’s son, Vice President Calvin Coolidge, would soon be sworn in as the President of the United States.

The news shocked the Coolidges, who were enjoying a family trip to their home in Plymouth Notch, Vermont. President Harding had also been touring the country during his “Voyage of Understanding.” Coolidge received reports that the president showed signs of recovery from a recent illness; his death was completely unexpected.

Calvin Coolidge sent a telegram expressing his condolences to First Lady Florence Harding shortly after receiving the news. Meanwhile, the family accommodated the crowd gathering outside their home, setting aside one room for reporters as John Coolidge greeted curious neighbors. Despite the commotion, the new president’s youngest son, Calvin, Jr., remained asleep. The family decided to wait until the morning to tell him the news.

The elder Coolidge, a notary public, administered the oath of office. Calvin Coolidge placed his hand on the Bible in a dimly lit room in front of a small audience, becoming the thirtieth president of the United States. His first act as president? Returning to bed.

As President Coolidge slept, a new telephone line was installed, creating a direct line of communication between the farm and the White House.

The next day, President Coolidge returned to the capital in his new role as commander in chief. 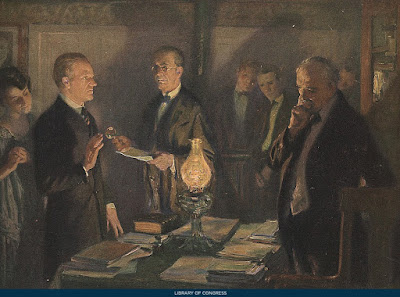 Email ThisBlogThis!Share to TwitterShare to FacebookShare to Pinterest
Labels: Calvin Coolidge, History, the presidency, US Constitution