How to face temptation

"No temptation has overtaken you that is not common to man. God is faithful, and he will not let you be tempted beyond your ability, but with the temptation he will also provide the way of escape, that you may be able to endure it." (1 Corinthians 10:13)

One reason we cave into sin, violating God's will as expressed in the Ten Commandments, is that we grow deaf to God when we're tempted. Instead of living in the freedom and dignity of a child of God, we're trapped by slavery to self, the opinions of others, and, to be honest, the devil. It's happened to me. It's happened to you.

The key to resisting temptation, with an aim to living lives that express gratitude to God for the grace and life we only receive from Christ, is to be tuned into what God wills for our lives, again as expressed in the Ten Commandments.

You get tuned into God and an intimate relationship with God when you spend time in His Word each day, not just reading it, but soaking it up, even memorizing it.

For example, this passage from 1 Corinthians 10:13 is one that small groups at Living Water have been memorizing in our Navigators discipleship small groups.

A good example of how God's Word can protect us from making sinful, stupid decisions is found in the experience of Joseph, son of Jacob, in the Old Testament book of Genesis.

Joseph's brothers had sold him into slavery in Egypt. But there, he ended up working for a powerful man named Potiphar, essentially functioning as his chief of staff and administrator.

Potiphar's wife was attracted to Joseph and tried repeatedly to get Joseph to go to bed with her. Joseph explained that he couldn't sin against God nor his master in this way.

But Potiphar's wife wouldn't take no for an answer. One day, she grabbed Joseph's tunic, saying, "Lie with me!" Joseph ran. When he did, the tunic slipped off of Joseph and he found himself running from Potiphar's wife naked. Enraged, she accused him of trying to rape her. Her possession of Joseph's cloak implicated him. Potiphar had Joseph slapped into prison.

Some might hear or read that story and think that the moral is that Joseph could have spared himself imprisonment if he'd only gone along with Potiphar's wife.

The moral is that Joseph ran from temptation and chose to walk with God, even when that meant being falsely accused and imprisoned for some time. He maintained his faith, his integrity, and his usefulness to the purposes of God for our lives. And Joseph was able to make the decision to run because He knew God through being steeped in God's Word.

Ultimately, of course, it was precisely because Joseph was imprisoned that he came to the attention of the Pharaoh. And because of Joseph's faithfulness to God and his faithful stewardship of gifts God had given to him, including the gift of administration, he was able to save his own people--God's people, Israel--from extinction. It was to be from the people of Israel that God's plan for salvation from sin and death was to be opened to all humanity through Jesus Christ. So, Joseph's decision to run from sin rather than to acquiesce to it is of eternal significance.

Truth be told, every time we face the temptation to sin, the stakes are higher than we may realize or imagine. Not only is our eternal salvation in play, so, potentially, is the salvation of every person whose life is impacted by our decision, whether we decide to cave or run.

Running from the temptation to sin can be painful. The things that tempt us hold out the real promise of pleasure. At least, they do for the short term. The fruit that Adam and Eve ate tasted good, but it also brought the burden of sin, of knowing not just good and righteousness, but also knowing evil and death.

It's better to run from sin and into the arms of the God we know in the crucified and risen Jesus. When we do that, we literally run from death to life.

Deep down, we probably all want to run from sin. We want God, whether we know much about Him or not. God wants to help us enjoy the life Christ died and rose to make possible. Soak up God's Word each day and He will help you stand where you should stand and run when you need to run.

Just some thoughts on this Wednesday. 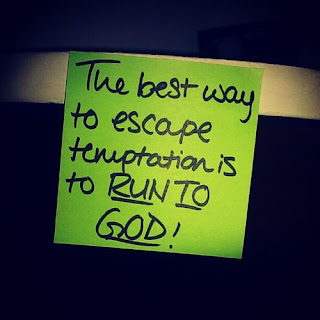