[Like many churches across the country and around the world, Living Water Lutheran Church in Centerville, Ohio, where I serve, has suspended all church-related activities. The original plan was to do so through March 31. But recent directives and advisories from state and federal officials intimate that the suspension could last longer. As the video and message below indicate though, we are continuing to offer Sunday worship of a sort and will continue to keep in touch with our members. We also will be posting midweek Lenten messages on Youtube.]

Ty Cobb was a phenomenal baseball player and a horrible human being: violent, racist, selfish. But in Ken Burns’ amazing documentary on the history of baseball, a story is told about the summer day when a retired Cobb dropped into a saloon for a cold beer. Behind the bar was Shoeless Joe Jackson, the disgraced Chicago White Sox player who helped throw the 1919 World Series for gamblers who paid him off.

Cobb ordered his beer. Jackson wordlessly filled a mug from the tap and served it.

Flustered, Cobb asked Jackson, “Don’t you know me, Joe?” “I know you,” Jackson answered, “I didn’t know if you wanted to know me.”

During my internship, we conducted monthly Holy Communion services at a nursing home. One woman would come to the services, but not receive the Sacrament. In private conversation one day she told us why. When she was seventeen, she’d had an abortion.

Although she believed in Jesus, loved God, and was conversant with the Bible, she could not believe that God could forgive her or want her.

Have you ever believed that God could never forgive you?

That you’re so bad that not even God’s gracious love could reach you?

That God could never have anything to do with you?
The encounter recorded in today’s gospel lesson, John 4:5-26, is well known. Jesus and His disciples are headed to Judea from their native region of Galilee and pass through Samaria to get there. Samaritans, you know, were generally hated by Jesus’ fellow Jews. But Jesus, we’ll see, has an agenda for passing through their territory.

Worn out from their walking, Jesus sits beside a well outside the Samaritan town of Sychar while the disciples go into the town to get some food. It’s noontime, the hottest part of the day, a time when nobody goes to the village well if they can avoid it. The women usually go out in the early morning or at dusk to fetch the water they need. But as Jesus sits, a woman shows up at the well.

Jesus asks the woman for a drink and she’s mystified. “You are a Jew and I am a Samaritan woman. How can you ask me for a drink?” (For Jews do not associate with Samaritans.) (John 4:9)

She will soon learn that this strange man at the well doesn’t give a rip about social norms. For Jesus, people--all people--are more important than all our social norms.

She will also learn that He’s initiated this conversation with her not to get something from her, but to give her something more valuable than all the water on this earth.

“If you knew the gift of God and who it is that asks you for a drink, you would have asked him and he would have given you living water.” (John 4:10)

The woman, like Nicodemus in last Sunday’s gospel lesson after Jesus told him that all who want to be part of God’s kingdom must be born from above, is dumbfounded by Jesus’ words. She asks how Jesus can possibly give her this living water He mentions when He doesn’t even have a bucket. I can be like that sometimes, wondering how God can do something for me that I can’t do for myself.

The woman, still thinking of water she can tote back home, asks Jesus, “Sir, give me this water so that I won’t get thirsty and have to keep coming here to draw water.” (John 4:15)

You see. she goes to the well when nobody else is there in order to avoid the wagging tongues of those who know all about her past and her present. She would love a source of water that would allow her to stay away from the pain of encountering others.
When we think that we can never be accepted or forgiven, it hurts too much to face God or people. We just want to fetch our water, go through our lives and not be embarrassed or humiliated by our sins, missteps, and failures. The woman’s reaction is understandable.

She still doesn’t understand what Jesus is offering to her. So, Jesus, Who I have found to be infinitely patient with me when I don’t get it, takes another tack to reach this woman. He tells her to go get her husband. She answers that she doesn’t have one and Jesus says, “You are right when you say you have no husband. The fact is, you have had five husbands, and the man you now have is not your husband. What you have just said is quite true.” “Look,” Jesus is telling her. “I know you. I know everything about you. Yet I’m offering this gift of eternal living water to you.”

The woman now says, “Oh, you’re a prophet,” as though she’s got Jesus figured out.

I have this happen to me all the time: I’m having a wonderful conversation with someone at the Kroger deli counter or in line at a store or on an airplane. Then they learn I’m a pastor and they start talking religionspeak as if to show me that (1) they now know everything about me; (2) they’re OK with God in their own way; and (3) they don’t need to hear any religious jaw, even though I haven’t been offering one.

The woman yammers on for a while in this vain and tells Jesus, “I know that Messiah” (called Christ) “is coming. When he comes, he will explain everything to us.” (John 4:25) “You see,” she seems to be telling Jesus, “I learned my Catechism well. I don’t need whatever you want to tell me.”

So, here’s this woman, in deep need of the love, forgiveness, and grace of God, talking with God in the flesh, but deeply resistant to laying down all her defenses--like hiding from other people, clinging to her ethnic religion, holding onto this world’s uncertainty rather than facing the truth about her sin and taking the certain grace of God offered in Christ.

In that moment, confronted by God’s Law that condemns our sin and by God’s grace that forgives our sin through our faith in Christ, the Samaritan woman is at risk of not taking hold of the gift of new life that Jesus came into this world to die and rise to attain for her. For you. For me.

And so, when she says that she knows that when Messiah comes, He will explain everything, making everything right, Jesus tells her, “I, the one speaking to you—I am [Yahweh, I AM] he.” (John 4:26)

It’s no wonder that this woman, so recently frightened of encountering anyone, runs back to the village to tell everyone she can find, “Come, see a man who told me everything I ever did. Could this be the Messiah?” (John 4:29)

Friends: The God we meet in Jesus Christ knows everything about you and wants you anyway.

He calls you out of the shadows into His light.

He calls you away from the parched provinces of sin, death, and condemnation, a furtive world in which we fear and avoid God and others.

Then He calls you to a life of constant refreshment by the living water that only the one true God of all creation can offer, a life in which we are set free to be loved and known God, to love God back, and to love our neighbors as God has loved us.

In Jesus Christ, we are known already and we are loved already.

When we respond to His Word of love and learn from the Holy Spirit to trust in Him, our sins are forgiven and we walk in the freedom and dignity of His grace. Even now.

May His living water give you the life that wells up to eternal life with Him today. Amen 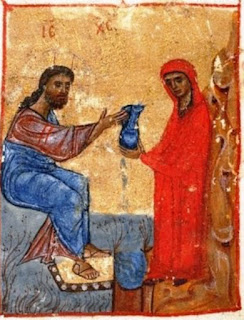 [This icon of Jesus' encounter with the woman at the well was created in Antioch in the eighth-century.]
Posted by Mark Daniels at 6:43 PM