The Addams Family or the Munsters? 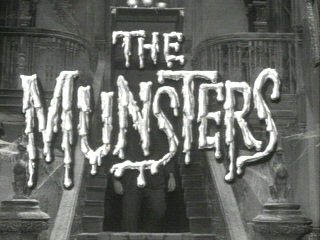 The brilliant Danny Miller of Jew Eat Yet?--and he really is brilliant--has an interesting post on his memories of these two Sixties "monster" sitcoms, the latter a ripoff of the former. I reacted...then Danny wrote a typically interesting response. Danny is one of my favorite bloggers.

I could never get into The Munsters and barely into The Addams Family. But the two represent a continuing tradition of TV programmers: Avoid an original thought unless desperation leads you to it.

As I recall, The Addams Family was aired by ABC, at that period the distant third-place network (that meant last place network in those days), a demographic backwater that held itself together with duct tape and shows appealing to the then-inconsequential younger crowd. That meant that they were willing to take some chances.

When The Addams Family hit, those original-thinking programmers at CBS told a producer, "Make [us] one of them!"

It's still happening, of course. We have all these stupid "unreality" shows because of 'Survivor.' We also have hour-by-hour or day-to-day season-long dramas because of '24.' We have police shows of the type we now have because of the 'Law and Order' franchises.

Mike Farrell was once asked what he thought that network executives had learned from the success of the M*A*S*H TV show. "Nothing," was his response.

The other day, I wrote a post on my site extolling the virtues of Gerald Ford's vaunted normalcy, seeing that these descriptions didn't reduce him. In fact, they elevated him because his normalcy was actually [an indication of his being a] functional human being! But sometimes "normal"--as in the case of network programmers incapable of being original unless they're desperate--is dysfunctional. The theme song for them might be taken from that old Bruce Cockburn song, "The trouble with normal is it always gets worse."

Oh, by the way, it was a revelation for me [as a kid] to see Carolyn Jones in King Creole (1958) on TV after I'd seen her in The Addams Family. Frankly, even on the TV show, she seemed asexual to me. With Elvis she appeared to be sexual, yet maybe because of the show, her sexuality seemed so feigned, so contrived.

Mark, I think the network programmers are worse today than they were in the 1960s. At least back then they'd give a show a chance until it found its audience. Remember that "The Dick Van Dyke Show" was almost cancelled during its first season but it was allowed to percolate until it (deservedly) became a huge hit.

I think both "The Munsters" and "The Addams Family" were refreshingly original, but of course I'm remembering them from the perspective of a 5 to 7 year old. I do think Carolyn Jones was underrated as a comedian. Remember her role as Morticia's older demented sister, based on Hamlet's Ophelia? And I thought she was incredibly sexy, but it was in that very subtle goyishe way where she just expected all the men to flock around her, as opposed to Lily Munster's neurotic hands-on nurturing which I loved. In real life, of course, Yvonne De Carlo was far more the sexpot than Carolyn Jones. And Carolyn Jones was Jewish. She converted when she married Aaron Spelling.

Danny's got a great point. One wonders whether the execs would stick with The Dick Van Dyke Show today. Because CBS did stick with it, we're now privileged to have 150 episodes--five years' worth--of what I think is the best sitcom of all time!

Did you know that The Munsters were born the same year as the Addams Family TV show. Although the Addamses were well-to-do, the Munsters were a more blue-collar family. Two classic TV series from the 1960s that were continued as movies.