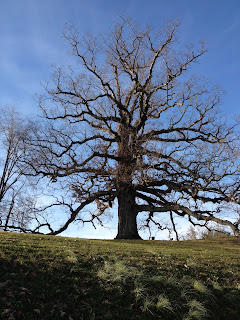 I snapped this picture while taking a walk this afternoon. The tree here is dubbed, The Great White Oak of Logan. It's huge. (At least by the standards of southern Ohio. It's obviously no Redwood!)

After the windstorm this past July, which knocked out our power for the better part of eight days, my wife and I were concerned that the oak, said to be over 600 years old, might have been damaged. The branches of a large tree in a neighboring yard, like thousands of other trees and branches throughout Ohio, did come down during the storm. In some places around the state, the wind during that short storm measured 98-miles per hour. Fallen trees and branches brought power outages throughout the state.

But this old oak seems to have been unscathed.

Leaves fallen, it's now ready for another winter in the seventh-century of its life. It's hard to imagine all that has unfolded under its branches.

[Also see here, for a 360-degree look from beneath the tree. It gives you a good idea of its height. FYI: Logan is about a half-hour drive from Athens.]
Posted by Mark Daniels at 5:00 PM