Recently, Althouse has been posting captured images from Google Streetview, focusing on random places that she enjoys visually. It's cool.

Prompted by her, I've been looking at places, both familiar and unfamiliar, from around the world on Streetview.

Through the years, I've visited a number of State Capitols, but have rarely taken the time to snap pictures while visiting. That includes the State Capitol in Columbus, where I used to work.

I thought it would be cool to share Google Streetview images of these buildings. They're fun for me to look at, too.

This is a view of the State Capitol in Madison, Wisconsin. Althouse lives in Madison. I did too, as a baby, when my father was stationed there with the Air Force.

A few years back, we stayed overnight in Madison, on our way to a wedding in Wilmar, Minnesota. But while in Madison, we took a drive through the main business district and caught sight of the Capitol.

At the time, as I recall, there were demonstrators on hand, part of the campaign to re-call Governor Scott Walker. In this picture from Google, you'll see a small group of demonstrators begging people not to elect Donald Trump as president. Neither demonstration was successful, but in Madison, an island of blue in what has become a purple-tilting-red state, political engagement is in the air, it seems. 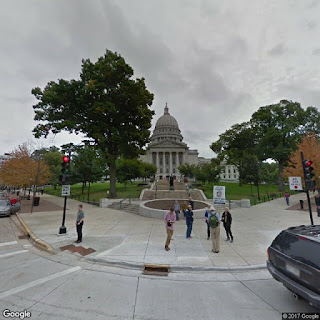