Willing to Be Crazy?

Peter, as directed by Jesus, reluctantly put out from shore and, despite catching nothing during an entire night’s work, hauled in a catch so big that the boats onto which the men dragged the bulging nets nearly sank. As an experienced fishermen, Peter knew that this wasn’t normal and that the One Who had commanded him to let down his nets wasn’t “normal” either.

In Jesus, Peter saw a holy man, even if he didn’t yet understand Jesus to be Messiah and God. (That would come later.) He saw the distance between Jesus’ righteousness and his own imperfections; so, he begged Jesus to go away. Peter didn’t want to be consumed by the holy fire of God; he knew, as Hebrews 12:29 reminds, that “God is a consuming fire.”
But Jesus tells Peter not to be afraid. Jesus has plans for Peter. Peter is going to “fish for people.”

Listen: Peter was right to reverence Jesus, of course. He was right to be humbled by the reality of Christ’s holiness and his own unholiness. When I stop long enough to let God speak to me, I too am overwhelmed by the distance between Jesus’ perfection and my own imperfection.

But Jesus doesn’t want to end His interchanges with us on that note. The Law rightly condemns us for our sin. Jesus comes with His gospel--the truth that He has conquered the Law, sin, and death for us through His cross--and assures that all who repent and believe in Him have nothing to fear.

The miraculous catch of fish was a notable sign. But signs always point beyond themselves. Peter might have thought, “I can make a lot of money with all of these fish. Maybe if I follow Jesus, He can make me really wealthy.” We know from Peter’s suggestion at the Transfiguration that he build booths for Jesus, Moses, and Elijah that Peter has a tendency to want to capture or domesticate miraculous signs, seeing them and not the Sign-Giver as the point. On the Mount of Transfiguration, Peter wanted to capture and bottle up the holiness he witnessed, like an addict wanting to keep a fix going.

But Jesus isn’t our junkie.

He’s not our cash cow either. Once Jesus assured Peter that Peter shouldn’t fear, before any earthly thoughts of his own comfort or advantage could form in Peter’s mind, Jesus told him, basically, “You’re not in the fishing business any more. This miraculous catch is a sign to you that from here on, you’re in the people-catching, disciple-making business.”

Jesus struck while the iron was hot. He didn’t tell Peter, “Now that you have some sense of Who I am, I’ll give you twenty-four hours to decide whether you’re going to follow Me or not. Consider whether you want to become an apostle or not.” No, that was the moment that Jesus wanted a response.

Would Jesus have accepted Peter if he’d put off the decision? Would Peter have come to play the role in Christ’s Church that he was to play had he deferred following? I don’t know.

But this is what I know: At the moment he was experiencing his greatest single success as a fisherman he had ever known, Peter left his nets behind.

This is a strange thing. It makes me wonder: If I experienced an enormous success, as a preacher or anything else, would I trust Jesus enough to follow when I sensed Him calling me to do something else?

This is probably a more soul-searing question than I think it is. I let little successes go to my head. A sermon gets more than the usual number of compliments, a family touched by grief tells me how much my ministry to them means, a friend extolls my cleverness...and suddenly, I’m in danger of thinking that I’m “all that.” What I mean is that even little successes put me over the moon.

So, I really wonder that, once exposed to the addicting power of being told, “well done,” would I have the faith and the courage to do something different if I sensed Jesus telling me, “It’s time to do this, Mark”? Would I be willing to leave the comfortable and apparently successful to go where Jesus sends me?

Once, I answered Jesus’ call to pastoral ministry and I believe that I’ve answered the call to specific congregations on four different occasions in the past nearly thirty-three years. But what if God suddenly made it clear that I needed to become a greeter at Walmart? Or a teacher in an inner-city school? Would I be as responsive as Peter was?

Say what we will (and often do) about Peter’s pig-headedness and impulsive braggadocio, the guy followed Jesus even when it made no sense to him. He was open to admitting when he was wrong. He was malleable to the direction of God. And at the moment he scored his biggest payday, he left it all to go wherever Jesus sent him, to do whatever Jesus wanted him to do.

He makes me wonder if I could ever be so sold out to Jesus to do anything that crazy. 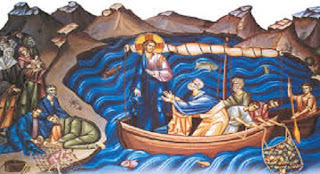