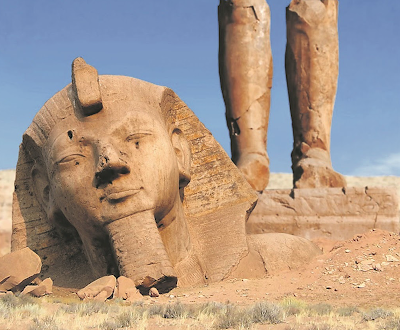 The subject of Shelley's 'Ozymandias' is the Egyptian Pharaoh we know as Rameses II. He was the most powerful of Egyptian kings and is thought to be the Pharaoh from whom God delivered His ancient people, the Hebrews.

In the poem, Shelley considers the temporary nature of wealth, power, and fame: All that's left of the great king's statue are lifeless stone legs and the fallen, half-sunken remains of the king's likeness.

Because we're all born with a desire to be like god, a sinful nature (Genesis 3:5; Psalm 51:5), we're all prone to build our own "kingdoms" and "monuments" to ourselves. But to build our lives on anyone or anything other than the God revealed in Jesus Christ is foolish and vain. Even "the pursuit of happiness" extolled in our country's Declaration of Independence ends in death.

But when we turn to Jesus, day-in and day-out, He gives us life: Life that's new here, made new by the forgiveness of sins, the certainty of His presence with us and His love for us, the power to face each day, and the sure and certain hope that the crucified and risen Jesus can give us life beyond the rubble of earth. "I have come that they may have life, and have it to the full," Jesus says (John 10:10). And Paul exults in the New Testament portion of the Bible: "...if anyone is in Christ, the new creation has come: The old has gone, the new is here!" (2 Corinthians 5:17)

Life can become wearisome when it's lived only for what this world has to offer. And it all turns to dust anyway. When we follow Christ, He imbues our daily lives with eternal meaning and we're liberated to live in love for God and love for neighbor. Rameses II never knew such freedom.

I met a traveler from an antique landWho said: “Two vast and trunkless legs of stoneStand in the desert . . . Near them, on the sand,Half sunk, a shattered visage lies, whose frown,And wrinkled lip, and sneer of cold command,Tell that its sculptor well those passions readWhich yet survive, stamped on these lifeless things,The hand that mocked them, and the heart that fed:And on the pedestal these words appear:‘My name is Ozymandias, king of kings:Look on my works, ye Mighty, and despair!’Nothing beside remains. Round the decayOf that colossal wreck, boundless and bareThe lone and level sands stretch far away.”
Posted by Mark Daniels at 8:07 PM